Introduction: Chronic active Epstein-Barr virus infection (CAEBV) is a rare, life-threatening disease entity involving multiple organs and systems. The disease could be presented in a single organ with atypical symptoms, be misdiagnosed at the early phase, and resolved without aggressive treatment. Previous studies reported favorable outcomes with early diagnosis and treatment, while in other cases, disease progression and presenting in other organs could result in a very poor outcome. Clinicians from any department should be aware of the CAEBV entity when an unresolved systemic inflammation presents.

Case Presentation: A 61-year-old female presented to the cardiology department due to edema and fatigue with the progression of symptoms, including fever, muscle weakness, and shortness of breath. MR images showed muscular edema, and ultrasound analysis revealed massive pericardial effusion. Results of laboratory tests indicated hematological involvement, liver damage, and positivity for EBV DNA, and EBER in muscle and intestine by staining. She was first misdiagnosed with ulcerative colitis, but the disease evolved to the muscles and cardiovascular system later on. Altogether, the CAEBV infection with enteritis, myositis, and pericardial effusion was confirmed in the case. Although diagnosed, the treatment of the elderly population remains rather challenging in severe cases. The patient died after disease onset for less than three years.

Conclusions: Elderly patients with CAEBV infection tend to have a poor prognosis. Early diagnosis would facilitate early treat- ment and the utilization of available options, which might reduce the disease mortality rate eventually. Individualized therapy and promising approaches should be further developed for CAEBV infection.

The concept of chronic active Epstein-Barr virus (CAEBV) infection was first introduced in 2005 (1); physicians are more aware of this special entity that is completely different from infectious mononucleosis and has a high risk for hemophagocytic lymphohistiocytosis (HLH) and post-transplantation lymphoproliferative disease (PILD) with very poor prognosis ever since then. CAEBV is associated with a significant amount of organ involvement and is more prevalent in East Asian countries. The median length of time between the onset of symptoms and diagnosis in patients with CAEBV was 20 months (2). CAEBV was considered a childhood disease, while recent surveys showed that more than half of the patients were adults with poor prognosis (3). Diagnostic criteria were evolved in the past decades for better evaluation, differentiation, and treatment.

Here, a Chinese case of CAEBV infection with enteritis, myositis, and pericardial effusion is reported.

A 61-year-old female patient was admitted to the Cardiology Department of the hospital affiliated to the University of Hong Kong-Shenzhen on 03 January 2019. She had edema and fatigue for 10 days since taking traditional Chinese medicine for half a month due to chronic diarrhea. She was diagnosed with ulcerative colitis (UC) two years ago and had an intermittent fever for nine months before admission. On admission, the patient had no fevers, rashes, arthralgia, diarrhea, and muscle pain, while muscle strength was reduced. The weakness was predominantly proximal and more prominent in the lower limbs. The results of laboratory tests were as follows: white blood cell count 2.83 × 109/L, hemoglobin 90 g/L, serum alanine aminotransferase 104 U/L, serum aspartate transaminase 148 U/L, gamma-glutamyl transpeptidase 58 U/L, and creatine kinase 1279 U/L. Antinuclear antibody titer was 1:80, and the extractable nuclear antigen panel and antineutrophil cytoplasmic antibody yielded negative results. Echocardiography showed moderate to large pericardial effusion (Table 1 and Figure 1B). The patient had an ongoing fever with a maximum temperature of 39°C and chest tightness later on. MRI revealed muscle edema of the right thigh (Figure 1A). Bone marrow did not support the diagnosis of HLH; there was no evidence of malignancy in PET/CT. After consultation with rheumatologist and discussion in the multi-disciplinary team, she was diagnosed with immune-mediated necrotizing myositis and was treated with intravenous immunoglobulin (IVIG) and methylprednisolone 20 and 40 mg/day, respectively. The symptoms were controlled, and muscle enzyme returned to the normal level. 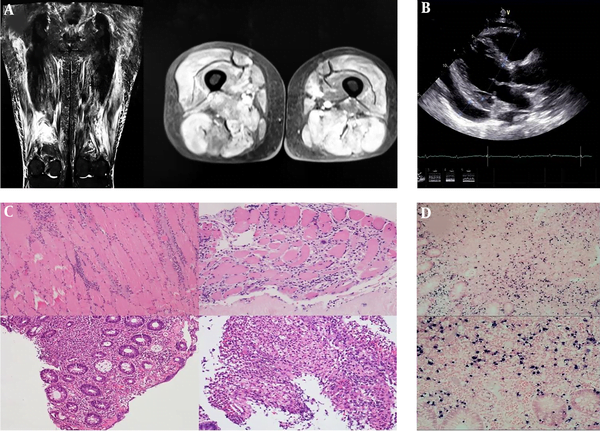 Figure 2. The Tower of London test

Figure1. Muscular, cardiac, and intestinal involvement of the case. A, MRI of proximal lower limbs. Diffuse muscle edema and irregular signal enhancement were recognized in contrast with MRI. B, Massive pericardial effusion in echocardiography on admission and after the treatment. The fluid sonolucent area was concentrated in the right ventricular anterior wall at the very beginning and transferred to the left ventricular posterior wall after treatment. C, Pathological findings in quadriceps femoris muscle, intestinal tract lymphocytes, plasma cells, and a few histocytes infiltration, as well as some fat and vascular hyperplasia, were noted in the intramuscular space. Intestinal pathology showed moderate to severe acute and chronic inflammation with the presence of ulcers. D, EBER staining in muscle and intestine. In-situ hybridization of Epstein–Barr virus-encoded RNA was positive in both muscular and intestinal cells.

On her 4th admission, she had diarrhea and hematochezia subsequently and did not respond to mesalazine. Enteroscopy demonstrated a diffuse colorectal inflammation, which was not a typical manifestation of UC with EBER staining (Figure 1C and D). The patient was then diagnosed with CAEBV infection and treated with prednisone 35 mg/day and acetaminophen. Cyclosporin A (CsA) is pending in case of the acute phase reactants remaining high or disease progression. She was discharged upon the patient and her relatives’ request on 17 May with prescription of prednisone 32.5 mg/day and acetaminophen 0.5 g/day, but she died one month after discharge.

CAEBV infection is one of the EBV-positive T/NK-cell lymphoproliferative diseases. However, it is liable to be neglected and misdiagnosed owing to its insidious onset and a general lack of awareness among clinicians. CAEBV infection is drawing worldwide attention after classified as the EBV-positive T/NK-cell neoplasms in the 2016 classification of the World Health Organization (4).

To the best of authors’ knowledge, this is the first case reported in a patient with enteritis, myositis, and pericardial effusion in the Chinese population. To look back on this case, the disease pattern was actually with the intestinal onset and then muscular and cardiovascular involvement. According to intermittent fever, leukocytopenia, hemolytic anemia, liver dysfunction, myositis, pericardial effusion, positive EA-IgA, the EBV-DNA of higher than 102.5 copy/mL, and positive EBER by staining in both muscle and intestinal cells, as well as the exclusion of autoimmune diseases and malignancies, the CAEBV infection was diagnosed.

The patient had also been diagnosed with inflammatory bowel disease (IBD) based on endoscopic and histologic findings in another hospital at the very beginning. Resemblances between CAEBV infective enteritis and IBD render the differentiation difficult (5). The main endoscopic findings of EBV enteritis included numerous shallow, small, and irregular ulcers, mainly involving the colon and small intestine together, with no cobble-like appearance and longitudinal ulcers. The histologic findings showed transmural inflammation with extended lymphoid infiltration, fissuring ulcers, and intraepithelial lymphocytosis. EBV staining of the specimen is strongly recommended when clinicopathologic changes are not specific or characteristics of IBD, such as granulomas, neural hypertrophy, and thickened muscularis mucosa, cannot be observed with multiple-organ or system involvement (6).

Myositis-like phenotype is well described in a previous study (7). Muscle weakness was predominant in the current statin-naive case; it was considered immune-mediated necrotizing myopathy at first, but the specific antibodies came out to be negative and muscle biopsies did not reveal muscle ﬁber necrosis and regeneration, which was not consistent with necrotizing autoimmune myopathy (8). The key point was also the positive EBER by staining in muscle cells.

Marked pericardial effusion in CAEBV infection is potentially fatal; it is usually detected by the EBV DNA testing of pericardial fluid (9). Although the cause of pericardial effusion was not explained by pericardiocentesis, possible causes were ruled out with a negative result of interferon-γ release test for tuberculosis, and no evidence of tuberculosis in lung and bone marrow CT images, as well as lymphoma in PET-CT examinations. And echocardiography did not reveal myocardial wall thickening suggesting amyloidosis. It was reported that cardiovascular magnetic resonance imaging could effectively and comprehensively reveal the early and dynamic changes presenting as aneurysms and stenoses of the coronary arteries, and act as an important tool in the field of cardiovascular complications (10). Unfortunately, the patient was reluctant to perform this noninvasive approach due to economic reasons and decided to give up treatment in the end.

The current study summarized previous studies on the CAEBV infection of 749 cases published in English from 1948 to 2020 (Table 1). CAEBV infection was initially identified in pediatrics, while more and more adult-onset cases were reported. The disease developed without an obvious gender predominance but can present a variety of manifestations from mildly self-limited signs to life-threatening complications. Therefore, survival time varied in different cases, but prognosis could also be diversified in severe cases with different treatments. There is no idea of what organ the EBV would choose to attack and what kind of individual treatment should be given for different organ involvement till now. There is no consensus on the treatment of CAEBV infection. Sawada et al. (11), suggested a sequential three-step treatment strategy consisting of prednisolone, CsA, and etoposide, a so-called cooling therapy, as the first step, followed by combination chemotherapy, CHOP (cyclophosphamide, doxorubicin, vincristine, and prednisone), and etoposide, cytosine arabinoside, L-Asparaginase, methylprednisolone, prednisolone (ESCAP. The last step suggested was RIC (HSCT, LDEC, fludarabine, melphalan, anti-thymocyte globulin, methylprednisolone, etoposide) followed by allo-HSCT (allogeneic hematopoietic stem cell transplant). Unfortunately, the resolution rate of CAEBV infection by the chemotherapies was very low, approximately 10% in unpublished data mentioned in a review (12). Initially, combination treatment with steroids and IVIG seemed effective for fever and fatigue in the current case despite disease relapse with fever, ongoing pericardial effusion, as well as disease progression with intestinal involvement, while the patient was not eligible for HSCT and had a high risk of adverse events, such as infection, for chemotherapies. She was reluctant to receive further aggressive treatment; thus, death was inevitable for her.

Although it was well established that predominant cell types were T/NK-cells in CAEBV infection, EBV-infected cells (T/NK or B-cells) were not classified by flow cytometry to guide further treatment in the current case. This was considered as a limitation of the study. Cardiovascular involvement could not be investigated by biopsy and EBER testing. Nonetheless, the clinical data of the current case were relatively complete with repetitive EBV DNA detection, a positive result for EBV specific antibodies, and the presence of EBER in muscle and intestinal tissue. And steroids and IVIG treatment prolonged the survival of the patient to some extent.

The mortality rate of CAEBV infection was twice higher in older patients. The median time from treatment initiation to death onset was 27 months; ranged seven to 63 (2). The prognosis was extremely poor, with limited therapeutic options. It is indispensable to establish more effective drugs to minimize the outcomes of CAEBV, and the effects of JAK inhibitors targeting NF-kB, or JAK/STAT mediating pathways on inflammatory symptoms and disease activity are highly anticipated (12).

Elderly patients with CAEBV infection tend to have a poorer prognosis. Early diagnosis would facilitate early and more treatment options, which might eventually improve the disease mortality rate. Individualized therapy and potential promising approaches should be further developed for this disease.