Correlation Between Pulmonary Vascular Permeability Index, Shock Index, and Severity of Septic Shock and Their Evaluation Values for Prognosis

Background: The changes before and after fluid resuscitation in patients with septic shock and their relationship with prognosis have rarely been reported.

Methods: This case-control study retrospectively analyzed the clinical data of 154 patients with septic shock treated at our hospital (Weifang, China) from October 2016 to October 2018. They were divided into a survival group or a death group according to the 28-day prognosis. Univariate analysis was performed for vital signs, the acute physiology and chronic health evaluation II (APACHE-II) score, the sequential organ failure assessment (SOFA) score at admission, SI at admission (SI1), SI at 3 h after fluid resuscitation (SI2), PVPI at admission (PVPI1), PVPI at 3 h after fluid resuscitation (PVPI2), and lactate clearance rate (LCR). The correlations of PVPI and SI with the APACHE-II score, SOFA score, and LCR were analyzed by plotting the receiver operating characteristic curves.

Results: Among the 154 cases, 70 survived after 28 days and 84 died. We observed that SI1, SI2, PVPI1, PVPI2, APACHE-II score, and SOFA score were significantly lower in the survival group than in the death group, while LCR was significantly higher (P < 0.05). Also, SI1, SI2, PVPI1, and PVPI2 were positively correlated with APSCHE-II and SOFA scores of patients with septic shock, but negatively correlated with LCR (P < 0.05). Moreover, SI2 predicted the prognosis of patients with septic shock significantly better than SI1, PVPI1, and PVPI2 did. When SI2 was 1.22, the Youden index was 0.822, the sensitivity was 91.23%, the specificity was 89.47%, the positive predictive value was 0.912, and the negative predictive value was 0.924. The positive and negative likelihood ratios were 0.897 and 0.375, respectively.

Septic shock is a common clinical syndrome resulting from tissue perfusion deficiency caused by severe systemic infection, leading to tissue hypoxia, vital organ damage, and even multiple organ failure (1, 2). Septic shock refers to persistent low blood pressure in patients with severe sepsis that cannot be corrected after adequate fluid replacement, accompanied by tissue hypoperfusion (3). With the mortality rate of as high as over 40 - 70%, septic shock has become one of the main causes of death for critically ill patients (4). Sepsis or septic shock cannot be easily diagnosed in the early stages and the severity or prognosis cannot be well assessed. Therefore, the early diagnosis is now mainly based on some easily measurable biological indices that benefit the design of appropriate treatment regimens and the reduction of mortality rate (5).

Acute respiratory distress syndrome caused by increased pulmonary vascular permeability is the main cause of high septic shock mortality (6). Recently, with the application of Pulse-indicated continuous cardiac output (PiCCO) in clinical practice, the Pulmonary Vascular Permeability index (PVPI) has become an early diagnostic marker for septic shock (7). At present, septic shock is often treated by early-goal directed therapy (EGDT), in which initial fluid resuscitation plays a key role, maintaining systemic organ perfusion as much as possible (8). Patients who well respond to initial fluid resuscitation have significantly better short- and long-term prognoses than those with poor responses (9). Shock index (SI) can indirectly reflect the effect of fluid resuscitation, as a classic and easily detectable index for the severity of shock (5). Until now, most studies have focused on preliminary determination of the degree of shock in SI patients. However, the changes before and after fluid resuscitation and its relationship with prognosis have rarely been reported.

Therefore, we herein aimed to investigate the values of PVPI and SI changes before and after fluid resuscitation for the prognosis of patients with septic shock to provide a basis for improving clinical diagnosis and treatment.

We retrospectively analyzed the clinical data of 154 patients with septic shock treated at our hospital (Weifang, China) from October 2016 to October 2018 in a case-control study. The inclusion criteria were defined in accordance with the diagnostic criteria for septic shock and included patients aged 18-75-years-old admitted no longer than 72 h from the onset. The exclusion criteria were severe heart, liver, and kidney dysfunction, death 72 h within admission, tumors, immune system and hematological diseases, atrial fibrillation, the positive result of immunodeficiency virus infection, pregnancy or breast-feeding status, and incomplete clinical data. According to the criteria, 154 out of 170 cases were included and 16 were excluded.

This study was approved by the Ethics Committee of our hospital (approval no.: YXLL201609281145) and conducted following the Declaration of Helsinki principles. Written consent was obtained from all patients. 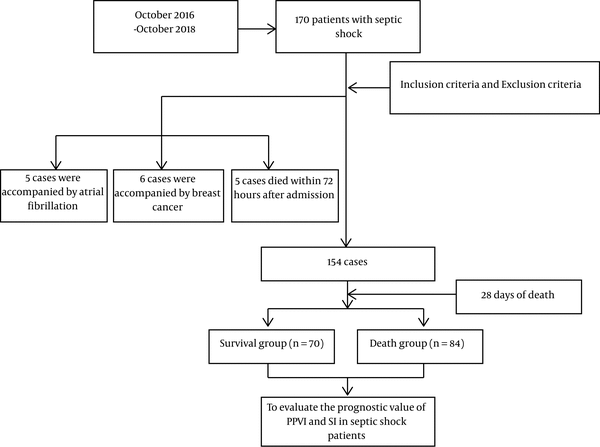 The observation indices were selected by combining the previous literature reporting the severity and risk factors of patients with septic shock with the factors reflecting the status of these patients.

All equipment in this study was calibrated, quality-controlled, and performance-tested to decrease errors. All indices were measured three times independently and averaged. Three observers were set and the Kappa index was 0.718, suggesting good consistency.

All data were analyzed by SPSS16.0 software. The normally distributed categorical data were expressed as mean ± standard deviation, and intergroup comparisons were made by the independent t-test. The non-normally distributed categorical data were represented as median (quartile) [M (QL, QU)], and intergroup comparisons were made with the rank-sum test. The numerical data were expressed as percentages, and intergroup comparisons were made by the χ2 test. Correlations were assessed by Pearson or Spearman correlation analysis. By using the parametric method of the binormal model, receiver operating characteristic (ROC) curves were plotted for the diagnostic values of PVPI and SI and the areas under the curve (AUCs) were calculated. The optimal cutoff value and corresponding sensitivity, specificity, Youden index, predictive value, and likelihood ratio were found. We considered P < 0.05 as statistically significant.

4.2. Correlations of SI With LCR, APACHE-II, and SOFA Scores of Patients with Septic Shock

Figure 2. Correlations of SI with LCR, APACHE-II, and SOFA scores of patients with septic shock

4.3. Correlations of PVPI with LCR, APACHE-II, and SOFA Scores of Patients with Septic Shock 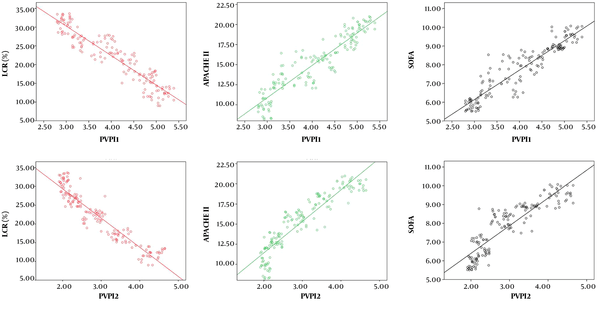 Figure 3. Correlations of PVPI with LCR, APACHE-II, and SOFA scores of patients with septic shock

4.4. Predictive Values of SI and PVPI for Prognosis of Septic Shock

Table 2. Predictive Values of SI and PVPI for Prognosis of Septic Shock 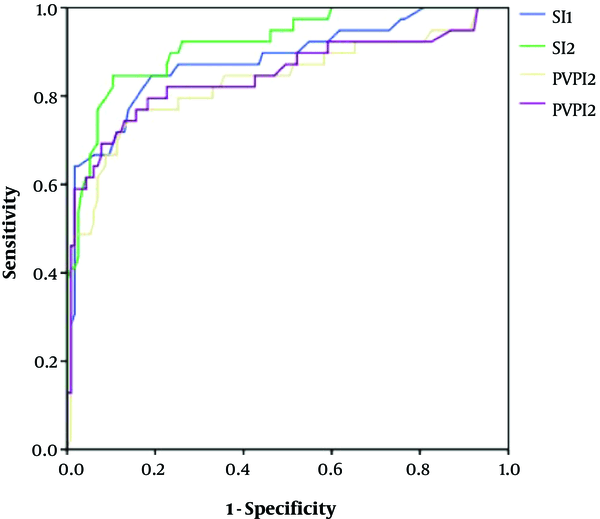 Figure 4. Predictive values of SI and PVPI for the prognosis of septic shock

Sepsis shock, the most serious stage of sepsis, can cause the dysregulated proportion of anti-inflammatory factors and pro-inflammatory factors due to a massive release of TNF-α, IL-8, and IL-6, which leads to the systemic inflammatory response syndrome, eventually inducing multiple organ failure and even death (11, 12). Because of the large number of capillaries in the lungs, alveolar edema and pulmonary interstitial disease are often caused by inflammatory factors and free radical attacks, resulting in a series of physiological changes such as reduced lung capacity, decreased compliance, and increased intrapulmonary bypass (13). The PiCCO monitor can provide a range of detection indicators, including PVPI. Extravascular lung water is less affected by ventilation tidal volume, oxygenation index, and positive end-expiratory pressure, thus visually reflecting the severity of pulmonary edema (14). Indeed, PVPI is the ratio of extravascular lung water to intrapulmonary blood volume, which offsets the effect of increased pulmonary blood volume on lung water; so, it can accurately reflect the permeability of pulmonary capillaries.

The diagnosis and treatment techniques for sepsis have been greatly improved since the introduction of the “surviving sepsis campaign” in 2002. Song et al. verified the application of sepsis standard for evaluating the diagnosis and prognosis of septic patients in ICUs (15), suggesting that SOFA is more suitable for the diagnosis and prognosis assessment of such patients than quick SOFA. At present, the initial treatment of septic shock is still controversial, but most ICU doctors follow the EGDT principle for clustering treatment. Fluid resuscitation is an effective method for treating severe sepsis and septic shock caused by trauma. It can markedly improve patients’ myocardial function, systemic oxygen metabolism, tissue perfusion, and then prognosis, thus being of high clinical value (16). Patients with good fluid reactivity have elevated blood pressure and central vein, but HR and Lac levels decline, often accompanied by increased tissue perfusion, while SI can reflect hemodynamic changes, which is simple and easily available (17). The correlations between SI and PVPI changes before and after fluid resuscitation and the severity of septic shock and the prognosis have rarely been reported.

The APACHE-II and SOFA scores not only can assess the patients’ condition, but also predict the mortality rate, which is the authoritative assessment scale for ICU applications worldwide. Studies have shown that the higher the APACHE-II and SOFA scores, the more serious the condition of sepsis patients (18). There is a significant positive correlation between the two and the severity of multiple organ failure. In this study, among 154 patients with septic shock, 84 died within 28 days, with a mortality rate of 54.54%. The clinical data of the survival group and the death group underwent univariate analysis. The results showed that no statistically significant difference was found between the two groups in age, gender, BMI, past history, and laboratory indicators. However, SI1, SI2, PVPI1, PVPI2, APACHE-II, and SOFA of the survival group were significantly lower than those of the death group, and LCR was significantly higher than that of the death group, with statistically significant differences (P < 0.05). It suggested that patients who eventually died were accompanied by more severe multiple organ dysfunction at admission and had poor fluid reactivity after EGDT. Therefore, for patients with higher scores, more attention needs to be paid to the treatment so as to reduce the mortality rate as much as possible. The results of the correlation analysis showed that SI1 and SI2 were positively correlated with APACHE-II and SOFA, but negatively correlated with LCR, suggesting that SI can reflect the patients’ reactivity to initial fluid resuscitation to a certain extent. The lower the SI after initial treatment, the better the correction of the patients’ shock. Moreover, it also indirectly reflects that these patients have obtained better tissue perfusion, which is conducive to organ function recovery. There was a significant positive correlation between PVPI1 and PVPI2 and APACHE-II and SOFA in patients with septic shock, but a significant negative correlation with LCR (both P < 0.05). This may be because the pathogens in the patients were effectively removed as the condition improved, the inflammatory response was controlled, pro-inflammatory factor levels were reduced, capillary leakage of lung tissue was reduced, oxygenation was improved, and tissue hypoxia was corrected, ultimately improving the condition. The results of the ROC curve showed that SI1, SI2, PVPI1, and PVPI2 could predict the prognosis outcome of patients with septic shock. The SI predictive value was the highest after fluid resuscitation. When SI2 was 1.22, the Youden index was 0.822, sensitivity was 91.23%, specificity was 89.47%, positive predictive value was 0.912, negative predictive value was 0.924, positive likelihood ratio was 0.897, and negative likelihood ratio was 0.375.

As a non-invasive hemodynamic indicator, SI is often used in emergency areas. In recent years, SI has unique advantages in identifying critically ill patients (19, 20). Rady et al. (21) found that there was a good linear relationship between SI and invasive hemodynamic parameters, such as stroke volume and cardiac index. In patients with sepsis, SI and the inflammatory factors IL-1β and TNF-α were significantly positively correlated, and the higher the SI, the more serious the target organ damage (22). Kobayashi et al. (23) reported that raised SI was associated with higher in-hospital mortality of patients with non-ST-segment elevation myocardial infarction. Besides, Yussof et al. (24) found that SI after 2 h of fluid resuscitation in the emergency department was a feasibly reliable predictor for the death of patients with severe sepsis and septic shock.

In this study, SI perfectly reflected the responsiveness of septic shock patients after fluid resuscitation, and SI at this time also minimized the influence of the factors at the original admission of the patients, such as heart disease and body temperature. Therefore, SI can more accurately reflect the organ function and hemodynamic status, showing important values in the prognosis of patients.

We thank all co-authors for their considerable contributions to this study.